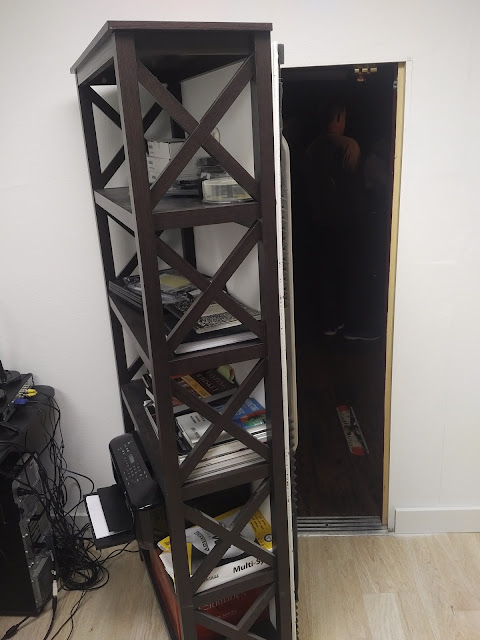 Popular posts from this blog

Side Note on Misadventure Vodka; or, I fucking love these guys! 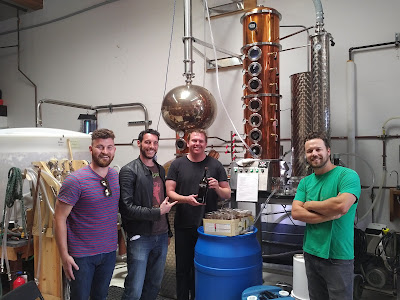 First of all, let me just say: if you don't think what these three dudes are doing with unsold bread is stupid amazing, something is seriously wrong with you. Allow me to set the scene: tiny manufacturing space in the middle of nowhere North San Diego Country aka San Marcos. Purpose of my visit is to check out The California Spirits Company . I step immediately onto a production floor where Casey the proprietor is behind the wheel of a fork lift (Raising a barrel drum on a palette to about twenty feet in the air, because "gravity works just as well as a pump." I can't tell if he's kidding). This place is so small, the five other people in there make it seem jam-packed. Casey jumps down and introduces himself. Only a few words are exchanged -why I'm there, where I had come from, Casey basically making sure I'm not a spy out to steal his potions- before he's back work. Casey not only distills his own rum and (excellent) liqueurs, but he also rents
Read more 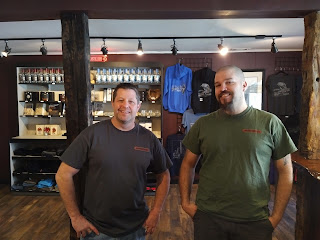 You can tell right away that Gordon and Mike, of Milk Street Distillery in Branchville, NJ, are brothers. It's not so much in how they look as how they flip each other off when I ask them to pose for a picture. (Thankfully, they strike a  hands-in-pockets pose soon after). Even if they weren't related, these guys would have to love each other, for the amount of time they spend together. Before deciding to devote their lives to making delicious spirits, the two were contractors for twenty-three years. The slowdown in housing construction, and a single article about a change to New Jersey's craft spirits laws, sent them on their journey. A quick restoration of a nineteenth century barn later, Milk Street Distillery is now the life of Branchville. I show up 10am on a Tuesday, when things are a bit sleepier.  The drive out to Branchville takes me through scenic forests, valleys and farmland. I don't have to stop and read the historic markers dotting the highway to
Read more 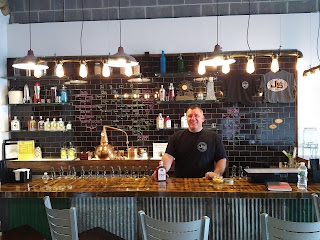 John Granata of Jersey Spirits Distillery, in Fairfield, NJ, is a very likable man. As one talks with him, you get a sense of familiarity. Then it will dawn on you: oh yeah, he's in that episode of The Sopranos, where Christopher cuts in line at the bakery or the fried chicken joint or wherever. John was Pissed Off Customer #5. Ok, maybe not literally, but John is that type of Jersey every-guy you see at pizza parlors up and down the Garden State Parkway - just waitin' on his slice of cheese! What I like about John so much is not just his openness -about himself, his business, about making booze- but his patience with my novice questions. In fact, there are several points during my visit where he'll pause mid-sentence and rewind to an earlier point in the conversation, worried he didn't explain it adequately the first time. You have to love that. John tells me about his varied background, which touches on TV production, home-brewing and learning from his dad, a c
Read more 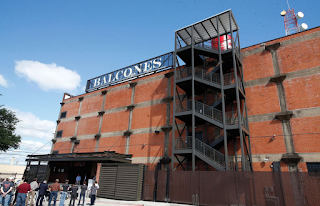 It's going to be hard to focus this post, because Balcones Distilling , in Waco, TX, has a lot going on. Maybe it will be best to start with Zack Pilgrim, one of their masterful distillers. I've used my brains this time and called ahead. That's how I find myself waiting in a lobby, chatting with Laurel the receptionist (and, as I will learn later, Zack's wife). She tells me she's been working there six months. I should have suspected something right away, because she seems to know a lot of the distillery's innermost workings for having been there a relatively short time. Zack arrives through a double door to the side, in all his bearded glory. If you look at pictures of other Balcones employees, you will conclude that a beard that normally would qualify a dude for lumberjack status in the real-world, is mere training fluff here. I'd say Zack, on the day I meet him, is somewhere in between. I'm excited that Zack seems excited to show me around.
Read more

Who knew you had to go to Upstate New York to find some heat? 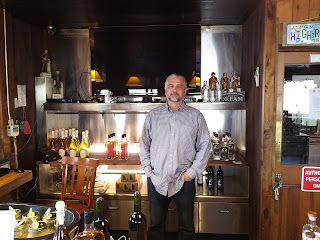 Ballston Spa, NY is a tiny, though apparently up-and-coming, town that has a strange association for me. I visited here unwittingly about sixteen years ago, when my car broke down on the Thruway. I was on a road trip from DC to Montreal, in a time before cell phones.  After standing on the side of the highway for a couple minutes, the steam still rising from the car's radiator, a state trooper pulled over and radioed us a tow. The closest town happened to be Ballston Spa. It was also the Friday of Easter Weekend. The tow truck dropped me, my friend and my car in front of an autobody shop that wouldn't open for another fort- four hours. We got to know the not-ironically retro motel and Chinese take-out place very well that weekend. I'm happy to report that my visit to Ballston Spa this time around is of my own choosing and much more eventful. I visit Jake Hewson at High Rock Distillery . He and his business partner, Peter, opened the distillery in 2014. They are fitting
Read more 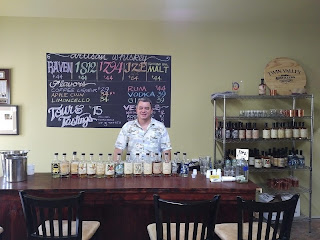 I don't know what kind of conversation I've walked in on when I stop by Twin Valley Distillers in Rockville, MD on a Sunday afternoon, but it sure is lively. The culprit, I will later learn, is owner/distiller Edgardo Zuniga. Edgardo fashions himself an expert on a number of topics: distilling, Maryland history, snazzy tropical shirts. But if you really want to see him get riled up, ask him the difference between two random Caribbean cultures. That's what he and a group of black folks are heatedly discussing at the bar, when I walk in. I don't even think anyone notices me at first. I grab a chair on the far end and listen. One of the ladies -apparently of Haitian heritage- is arguing how Haitians are the most mistreated group among the Caribbean. In fairness, she admits partial blame. They are also the most proud. Edgardo goes on about how most Costa Ricans don't even think of themselves as Latino, until they get to the US, of course, and are lumped in with al
Read more

Kristofer Kwant puts thought into everything at Triple Sun Spirits 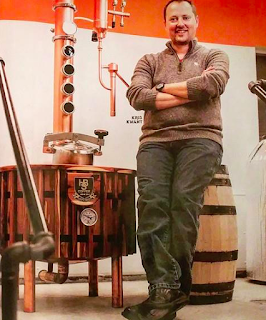 Let me start at the end: I leave   Triple Sun Spirits   in Emmaus, PA mentally exhausted. It's been a very rewarding hour and a half getting schooled by owner-distiller Kris Kwant. This man is meticulous in everything, and our conversation weaves across numerous topics: Pennsylvania's excise tax laws, how a spirit's coloring will effect its hydrometer readings and tons of molecular chemistry as it relates to flavoring and alcohol. Looks are deceiving and we -yes, I'm including all of us- unfortunately try to do our best with the most superficial of information. For instance, I show up at the Triple Sun facility and think "here's a hobby distiller renting out the back of a brewery, for his experiments and whatnot." Wrong. Well, Kris isn't even there when I arrive. The doors are unlocked because some folks are in the attached, though unrelated, brewery, so I make myself at home at the bar on the distillery side.  It's a spartan space. Or
Read more 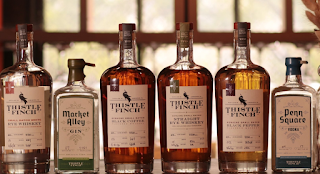 "Amish Country," as most of Lancaster County, PA is called, can often feel like a different country. Or more accurately, it can feel like suburban/rural America has been taken over by time travelers from the past. Their high-tech vehicles: black horse-drawn buggies with a giant reflective triangle stuck to the back.  If you're driving in Central Pennsylvania and suddenly hit an out-of-nowhere traffic jam, one of these buggies is probably the culprit - clomping along at 20 mph at the front of the line. Besides rolling farms, Lancaster County offers a cute capital city of the same name. Think of tidy redbrick row houses and wood porches, laid out in a grid. In what was once an industrial/warehouse section of this city stands Thistle Finch Distillery.  Specifically, the building it inhabits was once a tobacco warehouse from the turn of the 20th Century. (And most recently, recording studios for local 90s rock band, Live. The band has since retreated to the very top fl
Read more

I went to a hoedown and a distillery broke out 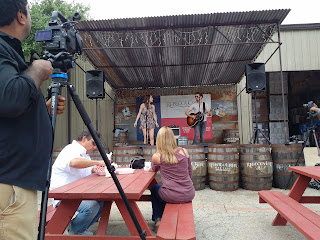 Only by chance did I pick the perfect day and time to visit Rebecca Creek Distillery  in San Antonio, TX. You wouldn't think Wednesday around 11am would be a particularly exciting time. But on this day, the country duo Smithfield are performing, promoting a reality show they're in the process of filming.  There's also a camera crew for a syndicated network show called "Best Of." The show is about to name Rebecca Creek the best Texas craft distillery for 2017, so they are capturing footage. Local TV news and a country music station have joined in as well. Add a decent bbq food truck (I'm sorry I was surprised by how good they were) and a tasting bar run by lovely Helena, and you've got yourself a party. Because this is a big event for Rebecca Creek, I get to meet quite a few of their folk. At the top of the totem pole there's founder Steve Ison. He tells me how once he conceived the idea of Rebecca Creek, he knew he would need the business acumen
Read more

Watch Out: Jason Riley WILL fuck with you 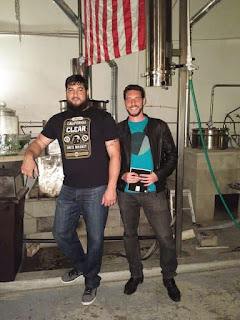 There are two men behind the bar of the tasting room at J. Riley Distillery . These are manly men. Think full beards, bellies, arms that could squeeze the life out of a water buffalo- precisely who you'd want on your side in a fight. The bigger, dark-haired one breaks free from joking with customers and I introduce myself. My first mistake is asking if either of them is J. Riley. "He's not here. I'm Steve and this is Doug," the big guys says, pointing at his gray-haired business partner. Something is clearly amusing these two, but I'm a little slow. No problem, we move on to the whiskeys, and there's a bunch. "Steve" lines the bottles up on the bar: 1775 Whiskey, Jeremiah Riley Bourbon, Cask Strength Bourbon, and the recent-award-winning California Clear White Whiskey (sure enough, a bronze medal hangs around its neck). In order: the 1775 is J. Riley's rye -21% rye, 75% yellow corn, and 4% barley mash- aged in bourbon barrels. It is
Read more